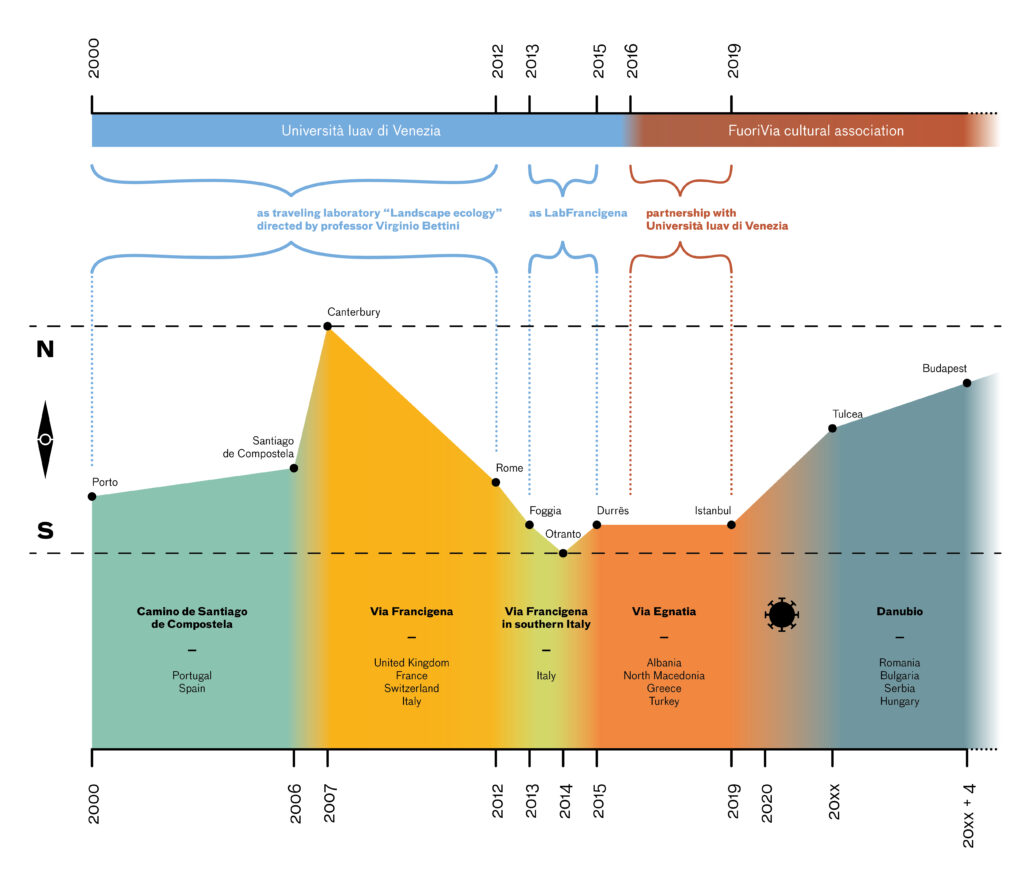 FuoriVia is a cultural association whose members are students, professors, researchers, but also those people who simply have a passion for walking. Historical and cultural routes are the object of our research studies; our research methods include analysing maps and studying socio-cultural relations in the area of interest; we use a model called “Participatory Planning”, carrying out our research on site by walking, analysing, and promoting our activities together with the participation of local administrations, universities and academic facilities, associations, etc.

Fuorivia was instituted in 2016 with the aim of carrying on the important activity of planning cultural routes, which was originally promoted in the traveling laboratory “Landscape ecology” directed by professor Virginio Bettini at Università Iuav di Venezia (Venice, Italy). During this experience, many cultural routes have been walked and explored by students in Europe and in Mediterranean countries, such as Santiago de Compostela (from 2000 to 2006), the Via Francigena (Rome- Canterbury, from 2007 to 2012), the Via Francigena in southern Italy (from 2013 to 2014) and the Via Egnatia (Durrës-Istanbul, from 2015 to 2019).

After crossing Western Europe, from the north to the south, and through the Balkans toward Istanbul, FuoriVia will walk us by the Danube, between the Black Sea and Budapest. The aim of this new project is to rediscover Central Europe, an area crossed by a river symbol of unity and multiple identity, finding a route which can be travelled both on foot and by boat. We will explore a complex landscape trying to find elements of environmental, human, and social continuity across Romania, Bulgaria, Serbia, and Hungary.

The purpose of our activity is to promote the philosophy of walking, rediscovering historical, natural and cultural routes, and thus promoting sustainable tourism. Our work consists also in facilitating communication between local and international organizations and institutions that are interested in protecting these routes.

We believe that slow travel can offer a privileged point of view on the surrounding environment, which can be contemplated painstakingly once you are immersed in it. Consequently, you can acquire new knowledge of the landscape ecology, the environment analysis, the geography, the anthropology, and the history of the areas you are walking along. Walking with FuoriVia is thus a unique opportunity to combine theory and practice, according to the model “learning by doing”, with a mixture of different subjects such as urban planning, landscape architecture, preservation of cultural heritage, environmental sciences, sociology, geography, economics and tourism management, visual arts, history, philosophy.